Who is Willard Whipple?

In 2010 I posted this photo of the Whipple Avenue exit in Redwood City California. At the time I wondered who the Whipple might be. Might it be Amiel Weeks Whipple, I wondered? He was an early explorer and surveyor of the American southwest. 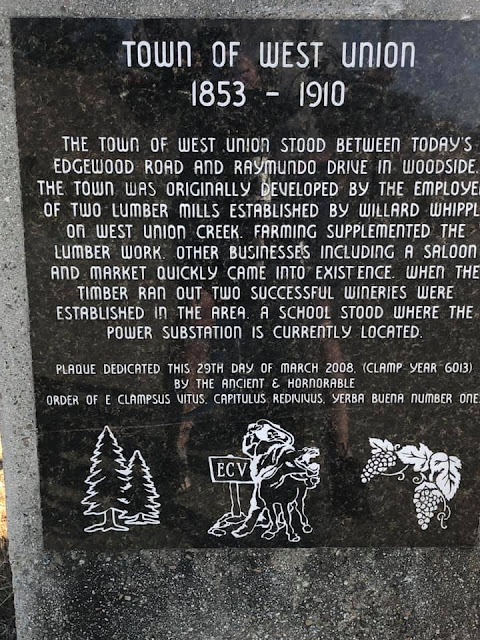 Tim also noted that "Willard’s first mill was built on the site now occupied by the Phleger Estate. The current occupant of that historic landmark is Gordon Moore, the founder of Intel."

A Wikipedia article entitled "Phleger Estate" has this to say about Willard Whipple:

Willard Whipple was one of many area lumbermen who dragged logs to the port at Redwood City. His Whipple's Mill Road has come to be known as Whipple Avenue. He was a Union sympathizer in the Civil War and named the creek on which his mills operated West Union Creek. Whipple built his steam-powered Upper Mill in late 1852 at the site of today’s Phleger House (now occupied by Gordon and Betty Moore) on the Phleger Estate.

Willard Whipple is the name most associated with the history of the area, since busy Whipple Avenue in Redwood City is named for him. The thoroughfare was originally called Whipple's Mill Road because of the lumber he hauled on it and then Whipple Road, before its current appellation.

The National Park Study goes on to say:

Whipple was born in New York around 1803. He married Elizabeth Hayes in 1824 and followed his parents by entering into the Mormon Church. It is thought he left the Mormon settlement at Nauvoo, Illinois in 1844, and then came to California.

I combed the Web, but found no indication that Willard had ever lived in Nauvoo. Might I find Willard in a census? To my surprise I found him in a California census!

Willard and Eli Whipple win a suit in 1854

I then found Willard and Eli Whipple mentioned in the newspaper Daily Alta California of 30 Oct 1854,  mentioning a suit filed by Willard Whipple, Eli Whipple, and two others in the Superior Court of the City of San Francisco against three defendants. The sheriff reports:

I have seized and taken into execution the following property, to wit: All the interest of the said defendants, any or either of them, in and to the steam sawmill known "Richards' Mill," situated on the mountain in the Redwoods, near the Pulgas Ranch, in San Francisco county.

It looks like Willard, whoever he was, won the suit.

The 1852 California census mentioned that Willard Whipple and family had last lived in Pennsylvania. On a long shot, I checked Ancestry and found a Willard there!

Probably not the same Willard, I thought. How could he have lived in Nauvoo, Illinois, in 1844, in Pennsylvania in 1850, and in San Francisco in 1852? The only similarity was in Willard's name and his daughter Rosette/Rosetta.

Could Eli be the person mentioned in the 1854 suit?

Checking the Whipple database I found two brothers that might possibly match:

It turns out that Willard and Eli were nephews of Edson Whipple, who was converted to the Mormon Church on 15 Jun 1840 while living in Philadelphia. After moving to Nauvoo, Joseph Smith sent him to Pennsylvania as a missionary. He tried to convert his relatives, but only Eli appears to have been converted. (Eli was baptized in 1844.)

I found both Willard and Eli in a Pioneer Database, 1847-1868. However they were leaving California to go to Utah!

In 1855 Willard traveled from Santa Clara to Utah with a William McBride Company:

This small company consisted of 24 people with 8 wagons when it left Santa Clara, California. They were joined by 13 others six days later and traveled down the coast and then inland from Los Angeles to San Bernardino. ... From there they traveled northward over Cajon Pass across the Mojave Desert on the California Road to Salt Lake City.

Among those in this company were:

So now we have seemingly impossible conflicts:

... And he makes a big enough impression in California that Whipple Avenue is named after him?

This company left Redwood City, California, with 19 missionaries and a few families. They traveled down the San Joaquin Valley, crossing Tejon Pass, and were joined by a few others going across the Mojave Desert to Utah. They reached Cedar City in late May 1858 and most of the company traveled north to Salt Lake City.

Included in this company were:

I tried the FamilySearch Digital Library to see if I could find any further corroborating evidence.

I found a book entitled The Whipples : a history of the Whipple family, 350 years, from Captain John Whipple to the children of Eli Whipple, written by Ervin L. Herbert, published in 1983. It makes several interesting points about Eli:

The book doesn't mention Eli's brother Willard. However, it does help explain how Whipples could be in Pennsylvania in 1850 and in San Francisco two years later.

But what about Willard?

It seems plausible that Willard and Eli might have both traveled together by ship to the Isthmus of Panama, crossing on foot to the Pacific side, then traveling by ship to San Francisco. According to Wikipedia, half of the 300,000 who were drawn by the 1849 California gold rush traveled by sea.

I quit searching for more information on Willard after 1855. My guess is that he returned to San Francisco, at least for awhile.

The 2 Apr 1889 issue of the Daily Alta California reported that "Willard Whipple, a life member, [died] on March 11th, at Farmington, Utah."

I'm convinced that Willard Whipple is the person with ID 8108 in the Whipple Database. If you find information to question that conclusion, please email the webmaster.

Willard Whipple's sawmill (at least one of them?) was powered by the first steam engine on the west coast of the Americas. Shipped around Cape Horn at the tip of South America, it was instrumental in providing lumber for the growth of the San Francisco area.