Who Is John William Whipple, M.D., of Chile?

Twenty-two years ago in March 1997 (barely two months after the whipple.org domain was "purchased," and before the Whipple Website existed), I received an email from Oscar Eduardo Whipple Ascui of Chile, telling of his ancestor John William Whipple, who emigrated from the U.S. to Chile in "about 1850." I added John to my PAF database that I eventually used to create what is now the Whipple Genweb. A few years later he was among the initial Whipples to end up on the newly created Disconnected Whipples page. He has remained in the database unchanged since March 1997—until today.


Today I received an email from Pablo Whipple of Chile. A descendant of John William, Pablo is a professional historian who received his Ph.D. from the University of California Davis. He has been collecting sources about his great-great-grandfather, hoping to find "the connection between the Chilean and the American Whipples."

I'll start with some highlights of his email, then continue with more details.

John received an M.D. degree from the Harvard Medical School in 1852. An index to Harvard University records from 1636 to 1870 includes this entry:

The "O.W. Holmes" who approved his M.D. was almost certainly Oliver Wendell Holmes Sr., whose Wikipedia article includes medicine as one of his numerous accomplishments. He taught at the Harvard Medical School and, "for a time, served as dean there," retiring from Harvard in 1882 (after which he continued to write poetry, novels, and essays until his death in 1894).

Page 1487 of volume 3 of The Harvard Medical School: a History, Narrative and Documentary by Thomas Francis Harrington, published in 1905, has an entry for John:

Pablo confirms that his ancestor did in fact die of smallpox in 1865. If we can find a John William Whipple born in Vermont in 1820, perhaps we can connect John.

The answer comes in a followup email from Pablo, dated March 18, 2019:


Although it doesn’t specify the year he attended Brown, the Boston Medical Journal confirms that he got his BA from Brown University (page 208). In the journal he is listed as from Malden, MA, and in the dissertation he presented before the University of Chile he says he lived in Andover, MA, before attending College, not mentioning if he was referring to Brown or Harvard.

... So it seems safe to conclude that John did attend Brown University in Providence.

Also, before going to Chile he probably lived in some or all of

Here is an excerpt from page 208 of the The Boston Medical and Surgical Journal, dated April 7, 1852. (John's entry is highlighted.) 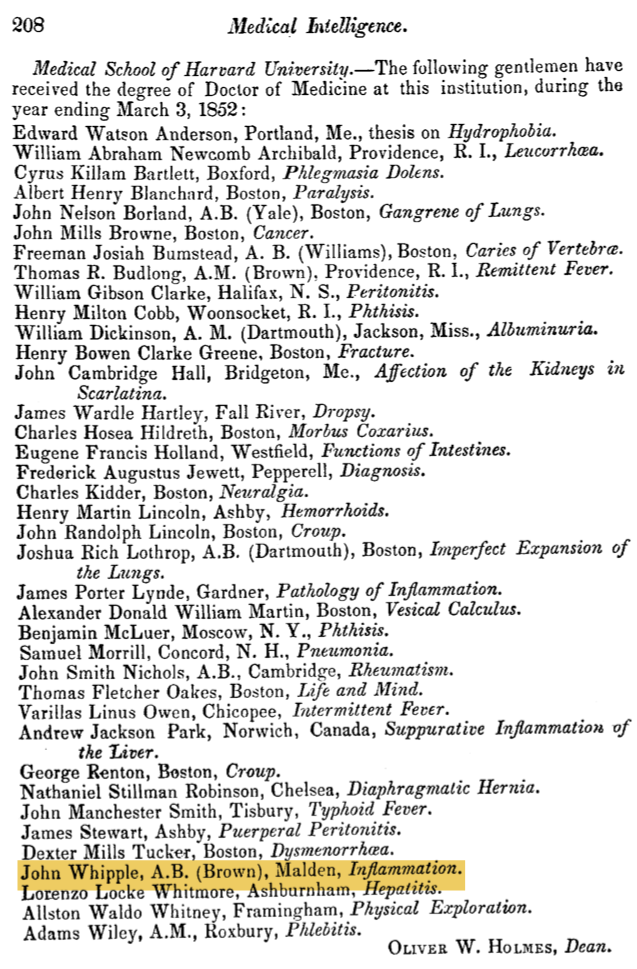 From the United States to Chile


It is not clear when John William Whipple (JW) arrived in Chile or if he came directly from the US to Chile. One source says that he was first in Bolivia. What is clear, is that he left the US soon after getting his MD from Harvard in 1852 ....


By 1857 JW was in Chile, and ask the University of Chile to validate his medical degree. Among other requirements, he had to write a dissertation about common diseases in Massachusetts (in Spanish, I have a copy). Once allowed to practice medicine in the Country, he was appointed as a state doctor in the rural town of Curico (100 miles south of Santiago, in Chile’s central Valley) during that same year. Although he was initially welcome by the community, soon after he got involved in several conflicts with local authorities because of the manner he practiced medicine, having to leave his first appointment, and practicing after in several small rural communities. At that time he was one of the few professionals in the country willing to work outside main cities like Santiago and Valparaiso. He was even appointed to Punta Arenas, a town that had been recently founded by the Chilean government in the Magellan Strait.


Pablo sent this announcement that appeared in Curico's local newspaper, announcing his services as a doctor:


After nine years in the country, he died in 1865 in the mining town of Illapel (180 miles north from Santiago) where he was appointed the year before to help with a smallpox outbreak affecting the area. Because he died of smallpox himself, his body was thrown to a cliff, together with the bodies of others that died from the disease.

JW story is quite remarkable and full of open questions such as why he came from Harvard to a country like Chile, to end up his days dying from smallpox while practicing medicine in one of the poorest and more isolated areas of the country at that time.


Some events after his death are more intriguing. In 1893, the US government contacted the Chilean ambassador in the US to ask information regarding John William Whipple descendants in Chile. The ambassador was informed by local authorities about who JW married (Adela Roman), and about his son Amedes (my great grandfather), including where he lived at that time and his professional activities. According to one newspaper article published that same year, the reason behind the interest in contacting JW son, was because JW two sisters in the US had died recently and there was an inheritance to be claimed.

Although I have copy of the report sent to the US by Chilean authorities informing about JW descendants and the newspaper article published in 1893, I never heard my father or anyone in my family say anything about this, and it seems that Amedes make no effort in contacting his relatives in the US.

The 1905 history of the Harvard Medical School (mentioned earlier in this post) gives 1820 as the year of John William Whipple's birth. The following statements from Pablo's email suggest that 1820 might be only a good guess:

In 1897 [John William Whipple's son] Amedes was again contacted from the US, this time by Harvard University asking details about his father’s life, also asking where his father was born in the US. Amedes answered that he did not remember because his father died when he was one year old and never heard his mother say the specific place where he was born. (a copy of that letter was sent to me by the Harvard Archive). Although Amedes did not give them news about JW birth place, The History of Harvard Medical School published in 1905 says that JW was born in 1820 in Vermont

Pablo cites one additional mention of Dr. John Whipple of Brazil in the Alsop Claim: "The case of the United States of America for and in behalf of the original American claimants in this case, their heirs, assigns, representatives, and devisees versus the Republic of Chile before His Majesty George V ... Under the protocol of December 1, 1909"

Dr. John Whipple is mentioned on the second page of this link relating to the Alsop Claim.

Where to Go from Here?