SUMMARY: This post explores the possibility that young John Whipple of Dorchester, Massachusetts, and (later) Providence, Rhode Island, might be the same person as John Whaple or Whaples, who was baptized on 13 Dec 1618 at St. Mary and St. Lawrence Church in Great Waltham, Essex, England. (Great Waltham is about 10 miles — a 21-minute drive by car — from Bocking, Essex, England.)

Descendants of Captain John Whipple have wondered in vain who the teenage John Whipple that arrived in Dorchester, Massachusetts, aboard the Lyon in 1632 might be.

Last week I received several emails from Dr. Al Church of Washington DC, regarding a baptismal entry for a John Whaples that he found while looking for records in the Essex (UK) Archive. The entry is for a John Whaples, baptized 13 December 1618 in the St. Mary & St. Lawrence Church in Great Waltham: 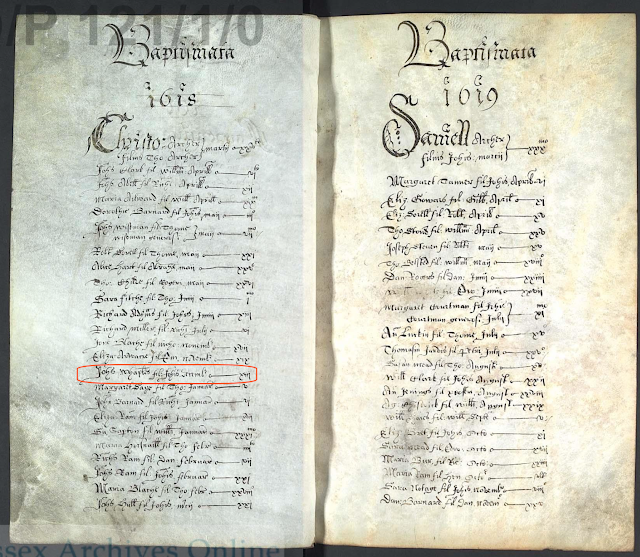 Marked in red on the left page above, the Latinish entry translates to something like "John Whaples, son of John, December ---- xiii"

(Click here to view a more high definition graphic of the page above.)

I immediately recalled an email I received from Dr. Charles Whipple of Oklahoma, who has done significant research on the Rhode Island Whipples. In his note of 2 April 2016, he wrote the following:


In my books on the Whipples on page 2 it states, "It is assumed that John was born around the year 1617. Debrett uncovered the name of only one individual whose christening was close to that date. His name was John Whaple, baptized 13 December 1618..." Debrett sent me that information in 1990 long before the Fiske article appeared. Perhaps Fiske's guess was wrong, and the two families are not related. John Whaple could have spelled his name Whiple at one point in his life? As you are aware, even the educated spelled their names in a variety of ways. Or as was typical at Ellis Island, the immigration authorities could have misspelled the name.

I recalled having read something about variant spellings of the Whipple name in the late Blaine Whipple's monumental book on the Ipswich/Bocking Whipples entitled 15 Generations of Whipples (Baltimore, MD: Gateway Press, 2007). On the first page of its Appendix One (p. 958), Blaine lists variant spellings of Whipple found in Whipple English records:

Notice that "Whaples" appears in the list. Some twenty-one years ago I (quite by accident) ended up with an internet server for the domain whipple.org.  I subsequently created a website for Whipples, which would include only individuals who spelled their name "Whipple," as well as their descendants, spouses and spouses parents and other close relatives. Ten or more years later I decided to include variant spellings that appeared in some UK censuses. I recall refusing to include information about Whimples that I received in an email. Although I don't see Whimple in the list of variants, if I were to receive the same email today, I would probably include the Whimples. (Like Whipple, Whimple means something like [roughly] "white pool" and variations.)

Dr. Church wrote his email after extensive research of his Church ancestors. I include much of one of those emails (with his permission):

As I have become more familiar with the history of this area (in and around the 1630s), it seems that most of the passengers onboard the 1632 Lyon were from the area surrounding Chelmsford (the site of Thomas Hooker’s inspirational sermons). While this observation may be old news, it would certainly fit with Capt. John Whipple coming from the Great Waltham area. A key player with respect to safeguarding Rev. Thomas Hooker was the (2nd) Earl of Warwick, one Robert Rich, who provided the bail to spring Hooker from a court appearance, and who sheltered Hooker’s family while Hooker was in exile in the Netherlands. The Earl of Warwick had a major residence just north of Great Waltham (known as Leez Priory that still exists today), which raises the question as to whether he might have had some role in helping young John Whaples / Whipple migrate on that voyage of the Lyon. Hooker eventually secretly returned from the Netherlands and sailed with his family on the Griffin in 1633. The Griffin was said to have sailed from The Downs in Kent, but I have found a place called The Downs in Maldon that is just east of Chelmsford. It also happens that the Earl of Warwick was a member of Parliament from Maldon in the 1620s. The Earl was not only a noted mariner and financier of privateers, but was also a prominent supporter of puritan settlements by way of The New England Company that became the Massachusetts Bay Company. He was later appointed in 1642-3 to be the Lord High Admiral of the English fleet by Parliament, contrary to the King’s orders. Given the location of John Whaples / Whipple and the elegance of that church, it might be worthwhile to research whether the Whaples family had some connection to the Earl. As you can see from the church register, there were not a lot of people associated with this church.

Here is a link to a description of that church (said to have been built in the 11th century) - https://britishlistedbuildings.co.uk/101122058-church-of-ss-mary-and-laurence-great-waltham#.W7T3vBNKjXQ

After seeing the copy of the baptismal register and reading his subsequent emails, I decided to look further. The appendices of volume 1 of Blaine Whipple's 15 Generations of Whipples (cited above) have extensive information on numerous early Whipples — most of them "disconnected." (They aren't included [yet?] on the Disconnected Whipples page of the Whipple Website.)

Much of the research of Blaine and Charles Whipple (noted above) has focused on attempts to find a biological relationship between Captain John and the Bocking/Ipswich Whipples. That research has failed (so far); additionally Y-DNA tests have failed to show any connection.

This blog post asks if John Whaples of Great Waltham, Essex, County, England — though not necessarily related to the Bocking Whipples — might be the same person as the teenage John Whipple who arrived as an Israel Stoughton's indentured servant aboard the Lyon in 1632.

As you click the links to his relatives, I invite you to scroll to the bottom of their pages to read the comments and wills. You will notice that John Whaples' father and brothers omit mention of John in their wills. He seems to have "disappeared" (without a trace?) by the time they wrote their wills. Did John "disappear" to America, I wonder?

If you can make a connection, let me know!

Note: On 9 May 2020 the Whipple Website accepted the determination that John Whaple or Whaples of Great Waltham, England is the same person as the person who came to be known as Captain John Whipple of Providence, Rhode Island. Captain John's relatives, gleaned from the appendices of Blaine Whipple's 15 Generations of Whipples, now appear in the Whipple Genweb and Database.